Olivia Leigh Moore is the daughter of Kevin and Gina Moore

Olivia has attended First Baptist Church for sixteen years and is actively involved in the youth group. She has served on the Mission First team in Jackson for two years and also on a mission team in Belize in 2020.

Olivia has played both basketball and softball at Starkville Christian School for six years.  She is also actively involved in the Fellowship of Christian Athletes and serves on their leadership team.

She has been involved in Girl Scouts for seven years, serving as student helper of four of those. She is working toward her Gold Award which is the highest honor awarded in Girl Scouts.

Olivia’s future plans are to attend the University of Mississippi and major in journalism.

One of her favorite Bible verses is Psalm 147:11 “The Lord delights in those who fear Him, who put their hope in His unfailing love.” 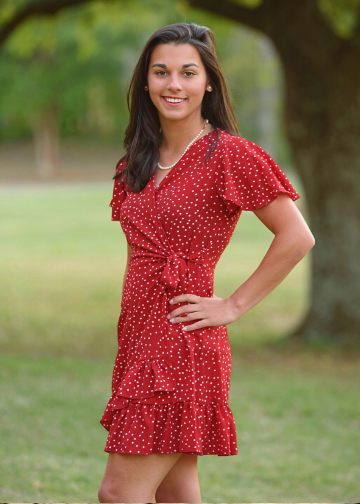