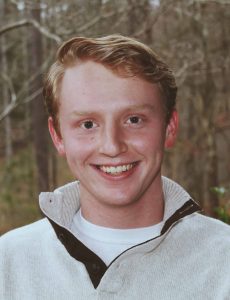 Christopher Roberts Mackey is the son of Guy and Kim Mackey. He is dual-enrolled at EMCC. He enjoys playing and watching soccer and holds three youth-level coaching licenses in soccer. Christopher has played with the Columbus Crew for four years, winning a state championship last year. He plays piano  and drums. He is also a brown belt in karate.  He has been on several mission trips, including trips to Puerto Rico and Nicaragua. After graduation, Christopher plans to attend EMCC for two years, then continue his higher education as God leads. One of Christopher’s favorite verses is Philippians 4:6, “Do not be anxious about anything, but in every situation, by prayer and petition, with thanksgiving, present your requests to God.”